Perrier Sorem gravity filters are designed to protect downstream hydraulic equipments such as river or sea water pumping stations. These filters are used to efficiently respond to the difficult operating conditions found in industry or in power stations.

When the filtering band is clogged, a pressure drop detector integrated into the filter triggers the rotation of the filter as well as the counter-current washing system. The waste is then evacuated by a washed-water collector. The pressure drops then decreases to its initial value.

Perrier Sorem traveling band screens have a classic profile with parallel faces or in a “pear” shape without a frame, which makes it possible not to exceed the admissible values of the output speeds, without unnecessarily increasing the height of the wire rake. All the constituent elements have been studied and dimensioned in such a way as to allow occasional overloads without disturbing operation.

The filtering band is made of a set of filtering frames, fixed on two endless chains, placed on each side and resting on two gears mounted on a drive shaft. The chain links are fitted with rollers which run on bearings sets fixed to the frame.

The chains links are fitted with rollers which roll on tracks fixed to the frame. 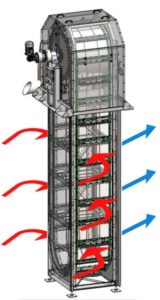 The filter band clogs as the retained waste builds up, creating an increase in pressure drop. This is controlled by a pressure drop detector associated with the rotating grid.

When the pressure drop reaches a preselected and adjustable value, the grid gear motor is energized.

It rotates the filter and the washing system opens, triggering the backwashing of the filter elements.

The water, thus loaded with impurities, is discharged into the chute.

The pressure drop then decreases to its initial value, which corresponds to obtaining a clean filter band.

This website uses cookies to improve your experience while you navigate through the website. Out of these cookies, the cookies that are categorized as necessary are stored on your browser as they are essential for the working of basic functionalities of the website. We also use third-party cookies that help us analyze and understand how you use this website. These cookies will be stored in your browser only with your consent. You also have the option to opt-out of these cookies. But opting out of some of these cookies may have an effect on your browsing experience.
Necessary Always Enabled
Necessary cookies are absolutely essential for the website to function properly. This category only includes cookies that ensures basic functionalities and security features of the website. These cookies do not store any personal information.
Non-necessary
Any cookies that may not be particularly necessary for the website to function and is used specifically to collect user personal data via analytics, ads, other embedded contents are termed as non-necessary cookies. It is mandatory to procure user consent prior to running these cookies on your website.
SAVE & ACCEPT